There’s one thing the town doesn’t have, and one thing Stephanie really needs: an optometrist 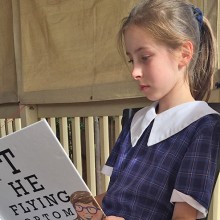 The Flying Optometrist, by Joanne Anderton, illustrated by Karen Erasmus

Stephanie lives on a farm near a small town in outback Australia. The town has a general store, a hotel, a school - but no optometrist.

That’s a problem, because Reg the stockman can’t read anything up close, a tiny piece of metal flew in Bill the plumber’s eye, Aunty Pat’s eyes are getting cloudy, and Stephanie’s glasses are broken.

Because Australia is so large, it is difficult for people living in the outback to get medical help. Thankfully the flying optometrist and organisations like the Royal Flying Doctor Service are able to visit these isolated areas so that people living in remote towns get the medical help they need.

An absolutely beautiful picture book about a flying optometrist and what it is like to live in a very small town in Australia.

The flying optometrist, for children aged four and over, is published by the National Library of Australia in association with the Brien Holden Vision Institute, which saw the value in communicating the message to all children.