Leigh Higgins in 1961; Leigh in 2019 when he received his 60 year long service medal and clasps from Ambulance Tasmania.

By
Council of Ambulance Authorities
Issue
75

Each year, almost 6 million people give their time by volunteering in a variety of emergency services in Australia – 11.6 per cent of these in health and wellbeing. Volunteers are one of our most important assets and are often on the forefront of community engagement. They bring a wide range of skills, knowledge and clinical abilities, but most importantly their time, effort and energy to rural and remote communities. They are a vital part of emergency service delivery in rural and remote Australia, usually as part of other emergency services. The ambulance services make a great effort to ensure their skills are improved. Even during COVID-19 face-to-face training has been made available with many volunteers completing Certificate 2 in Medical Service First Response to formalise their education.

Rarely does an organisation get the opportunity to recognise 62 years of service by one of its volunteers. Leigh Higgins ASM, ESM joined St John Ambulance Cadets at the age of 12 in 1955. Two days after turning 16, Leigh joined the St John Ambulance transport division and commenced his long service as an ambulance volunteer in many capacities and locations. Leigh volunteered as an ambulance attendant on weekends and during school holidays. He frequently ‘filled in’ in the radio room answering phone calls, despatching vehicles (then called mobiles), operating the radio and completing daily callout sheets. Frequently, when Leigh worked overnight, he was dropped off at school the next morning by ambulance.

As a 16-year-old Leigh saw many things not expected of people that age. Seat belts and air bags had not been invented and drink driving was rife. Road deaths were about four times greater than they are today, and serious trauma was also common. Leigh frequently attended these situations and not only treated the injured but also transported deceased people on open stretchers to Ward 13 (Royal Hobart Hospital Mortuary).

At the beginning of 1961, after Leigh had completed high school, he enrolled to attend teachers college in Launceston, which didn’t commence until 1 July that year. In March, Leigh was requested by the Secretary-Manager of St John Ambulance, Mr Trevor Jacobs, to go to Burnie to assist in the establishment of a new ambulance service. With ambulance officers Leigh Bradshaw and George Holloway (also from Hobart), Leigh assisted in the training of the new volunteers at the Burnie station and the new Smithton brigade. Apart from being an ambulance attendant, Leigh also operated the radio room.

In July 1961, St John commenced the operation of the Launceston Ambulance Service and Leigh became the first volunteer there when he started at Launceston Teachers College. During the early months, until volunteer numbers built up, Leigh operated the radio room at night in exchange for accommodation. Leigh went ‘on road’ during weekend shifts. He volunteered at the station until May 1963 when he left to commence his teaching career. For the next few years, Leigh volunteered in Hobart as an attendant one night a week and sometimes at other times when there was a staff shortage.

In 1970, ambulance services were taken over by the Tasmanian Government. At that time, Leigh was in New Guinea as the Principal of an all-native school. Although he had no ambulance involvement, Leigh rendered first aid there including treatment for tropical ulcers and scabies. He became very proficient at giving penicillin injections.

Leigh’s ambulance qualifications had expired so he volunteered in the radio room in Hobart regularly on a Monday night from 1971 to 1972 and then, from 1973 to 1974, Leigh moved to be the Principal at Poatina School.

Avoca Ambulance Service was created through community fundraising, with Leigh as Chairman, and took delivery of an EJ Holden ambulance which was surplus from the Rossarden Mining Company. It was later replaced by an F100 ambulance ex-Swansea Ambulance Service. Residents of Avoca paid a $5 annual voluntary levy to assist. The ambulance was attached to the local district nursing centre and the volunteers would drive for the nurses.

From a quiet beginning 35 years ago, the Bruny Island service has become much busier with Bruny Island becoming a popular tourist destination. A large proportion of the callouts are from visitors becoming ill or having car accidents.

Leigh was Principal at Bruny Island District High School from 1981 to 1991, until his retirement from the Education Department. During this time Leigh was also instrumental in setting up the police boat jetty at Roberts Point, Bruny Island.

Leigh has served the Bruny Island community as: 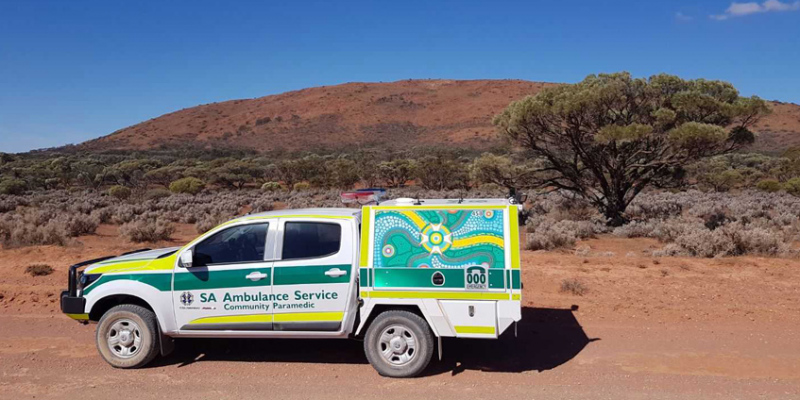