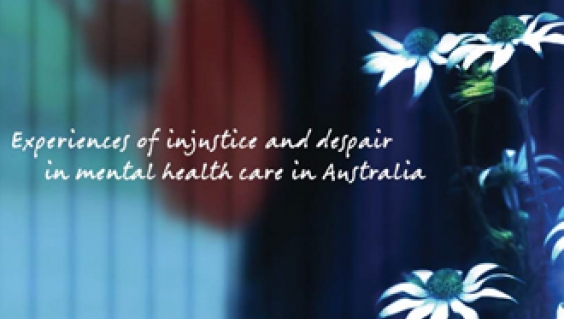 Grace Groom was CEO of the Mental Health Council of Australia (MHCA - now Mental Health Australia) from 2003-2005. Grace achieved so much to get mental health onto the political agenda, especially through the publication and promotion of two particularly strong, poignant and evidence-based publications.

The MHCA's work on both of those reports was supported by the University of Sydney's  Brain and Mind Research Institute, led by Ian Hickie, and the Human Rights and Equal Opportunity Commission (Sev Ozdowski, Commissioner).

The first, in 2003, was Out of Hospital, Out of Mind. It pointed out that mental disorders in Australia accounted for 27 per cent of all disability costs but attracted only 7 per cent of health funding. This balance is a measure that has been widely used in mental health and indeed other health advocacy in the years since then.

That report pointed out that although the Australian Government had increased its mental health expenditure, two-thirds of that increase had been in the cost of new pharmaceuticals.

The second influential report was Not for Service - Experiences of Injustice and Despair in Mental Health Care in Australia (2005). Grace Groom initiated the report and undertook the community consultations in 2004 with Ian Hickie, Keith Wilson and Sev Ozdowski. Ian Hickie and John Mendoza prepared the report and managed the political strategy that followed.

Both of these groundbreaking and influential reports made it clear that de-institutionalisation had not been accompanied by corresponding supports for mentally ill people to live in the community.

Out of Hospital, Out of Mind had two other messages. Although mental health consumers and families were angry about the lack of real service development, there was no desire to return to an institutional system of care. And there was the need for much greater consumer and carer involvement in planning and implementation of services.

The 2015 Grace Groom Memorial Oration, presented on 21 October by Professor Mike Slade, from the UK, picked up in particular on this last theme.

Mike's inspirational address focused on Australian progress in moving to a fully recovery-oriented mental health system. Fully supporting recovery will involve new roles as social activists for mental health consumers, their families and for mental health professionals. Developing inclusive communities which are friendly to difference is in the interests of us all.