Opinion Piece: Measuring the fairness of the Federal Budget for rural people 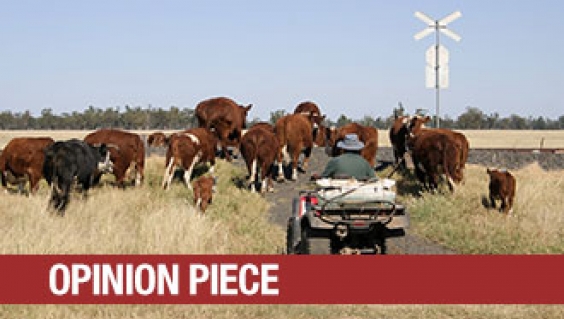 As we look back at the announcements made in the 2014 Federal Budget over the coming months, three contextual questions will be deserving of attention.

How will we assess whether the savings measures we seem to have accepted in order to bring the economy back into surplus are justified – not only in economic terms, but in terms of their impact on the health and wellbeing of the people in our nation? Or in other words, to what extent have the challenges in Australia's fiscal circumstance been exaggerated, for what purpose – and to what effect?

When will changes to arrangements for taxation expenditures (such as for superannuation) and revenue measures (including the GST) assume their proper place in considerations of Australia's budget situation?

To what extent can the unfairness which seems to be built into several of the savings measures be mitigated in putting those measures into practice?

Thanks to Catherine Nielson who has prepared the following overview of a number of Budget measures that, particularly when combined, are likely to have a damaging impact on the people of rural and remote Australia.

The basic ingredients for a decent quality of life in Australia include access to quality, affordable education and health care, safe and supportive family and community relationships, sufficient nutritious food, good conditions of work and leisure, and quality of housing and built environment. Access and exposure to all of these is not distributed equally across our nation. And the associated health outcomes are not distributed equally, either – they are in large part determined by the place where people are born and the environment in which they grow and participate as adults.

An underlying assumption of this year's budget discussions, at least from the Government’s perspective, is that it is ‘fair’ and reasonable to expect all Australians to share equally the burden of budget cuts or increased costs. However, when access to goods and services is not available to all citizens on an equal basis, and when people do not in real terms have an equal ability to pay, acting on this assumption only exacerbates existing inequality.

Public health outcomes are determined by a far broader range of factors than merely access to medical services and pharmaceuticals. Increasing the cost of medicines and imposing an additional $7 co-payment for a visit to the doctor will unfairly burden lower income groups, and be compounded by Budget decisions relating to social welfare, employment opportunity, household income, education, housing and transport. This combination of Budget measures will serve to increase inequity within the Australian community, and contribute to poorer health outcomes for those who are already disadvantaged.

Welfare payments
Significant reductions are proposed in benefits payable in Family Tax Benefits A and B. For example, for FTB B the maximum adjusted taxable income at which eligibility cuts out will be lowered from $150,000 to $100,000. And whereas the scheme previously extended to families with children under 18, it will be cut off for families where the youngest child is six or older. Payments for families who do qualify will no longer be indexed to inflation (until either 2016 or 2017), resulting in a loss of income in real terms for those reliant on this assistance.

Changes to eligibility requirements for Newstart and Youth Allowance will mean that families will be required to provide greater financial support for adult children for longer. School leavers will be forced to wait for 6 months before being eligible to apply for Youth Allowance, and young people will be unable to apply for Newstart until they are 25 years old. People on Newstart under the age of 30 will only be eligible for payments for 6 months out of every 12 months they are unemployed. It is difficult to envisage how young people could maintain independent living arrangements with such an unstable income source.

There are already pockets of very high youth unemployment in rural and remote areas.

Age pensions
Tighter means testing, increase in the age for eligibility and lower rates of indexation for the age pension will unfairly burden one of the most vulnerable sectors of our society. Proposed changes to the pension will not come into force until 2017, but the Seniors Supplement Payment for Commonwealth Seniors Card holders will be discontinued from July 2014. While the rationale is that everyone must play a part in bearing the burden of budget cuts, it must surely be recognised that growing older is not a lifestyle choice, and the current pension is not generous by developed world standards.

The impact of such decisions on older individuals will require other family members to do more – spreading the burden.

Disability Support pensions
The eligibility criteria for the disability pension will be tightened, and the Government will introduce a regime of ongoing eligibility assessment reviews. People under 35 who are currently receiving a disability support pension (DSP) will be required to participate in compulsory programs - including Work for the Dole - if they are assessed as being capable of working more than eight hours a week. People who were previously deemed eligible for DSP payments between 2008 and 2011 will have their eligibility re-assessed.

These measures are likely to increase perceptions within the general community that people living with a disability are somehow shirking their responsibilities to participate fully in society, and need to be forcibly encouraged to work – when evidence shows that the opposite is in fact the case. Like many other social determinants of health, disability is not a lifestyle choice.

Fuel Excise
Families will pay more for fuel, with the petrol excise to be indexed to inflation every six months. Despite subsidies for the transport industry, this will translate into increased costs of goods and services for people in more remote areas, including for food and other essential items.

With fewer or zero public transport options, people living in rural and regional areas have to rely heavily on private motor vehicles for work, education and healthcare. Compared with families in major urban areas, they will be hit hard.

Indigenous programs
Over 150 existing Aboriginal and Torres Strait Islander programs, grants and activities are to be replaced by five broad-based programs under the proposed Indigenous Advancement Strategy, resulting in net cuts of $534m. More than $160m of these cuts will come out of Indigenous health programs, and this amount is to be redirected into the Medical Research Future Fund.

Many people will be uneasy about a decision to withdraw funding for health programs for Australia’s most disadvantaged people on the grounds of "eliminating waste". And some people believe it is ironic (or worse) to invest in a Medical Research Future Fund 'to find cures for disease', while cutting funding for the CSIRO, whose research (including 'basic research') is a pre-requisite.

More critically, it appears unlikely from the available information that the research funded through this measure will focus on the key factors and determinants that impact on Indigenous health and wellbeing.

Environmental initiatives
Renewable energy developments have great potential to strengthen the economic base of rural areas. But this prospect has in effect been put on hold by budget decisions. The Carbon Capture and Storage program has been cut by $460 million over three years. The Government's $2.55 billion Emissions Reduction Fund is to be drawn down over ten years rather than four. A $100 million program to roll out solar energy systems in 25 towns and 100 schools has been slashed to $2.1 million over three years. Other clean technology programs face a $44.7 million cut.

The impact of these will seriously dent investment and employment prospects in some rural areas and prejudice the viability of some existing demonstration and pilot projects.

New funding of $525 million for the Green Army initiative, which could have been expected to deliver additional employment and training opportunities - particularly in rural areas - has been largely offset by a $438 million cut to Landcare. Existing Landcare community groups currently do a similar job, and in similar locations, to what the Green Army will do. This initiative will likely result in mere cost-shifting (i.e. from welfare to work-for-the-dole), rather than increasing provision of genuine long-term employment opportunities for people in rural and remote areas.

Without clear signals from government to discourage ongoing carbon pollution, climate change impacts and effects will continue unchecked, with devastating results across all sectors of the economy, society and the environment, at national and global levels.

Education
Higher education reforms, including the uncapping of fees, will see young people faced with higher university costs. This is likely to impact disproportionately on young people from rural and remote areas, whose access to equitable educational opportunities already compares unfavourably with students in metropolitan areas. A deregulated market will increase pressure on regionally-based universities to compete for limited funding and enrolments, making it more difficult for them to survive and flourish, thus amplifying existing inequity.

Conclusion
Overall, evaluation of the changes in such program areas as briefly described here leads to a gloomy prognosis for the income and wellbeing of families in rural and remote areas. And therefore it leads to a gloomy outlook for their health.

The Alliance will continue to analyse the Budget measures and interact with their implementation to ensure that all is done to mitigate against adverse impacts on rural people.

Please let us have your thoughts and comments on this summary and what you see as the key opportunities and concerns for the more than 6.7 million people of rural and remote Australia stemming from the 2014-15 Federal Budget.