The Minister for the Rehabilitation of Politics 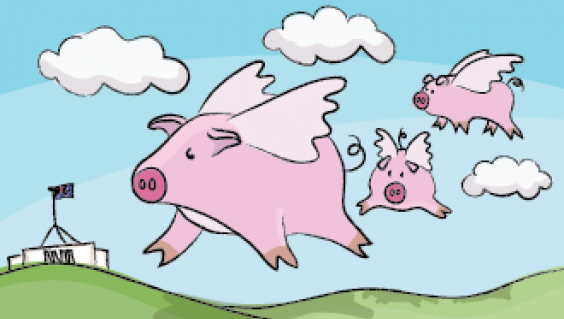 At this week's Palliative Care Australia Conference in Canberra there was a panel session on what should be expected from the new government in its first 100 days.

1. To begin to rehabilitate politics

Over the past decade or so politics has won for itself a very poor reputation. One of the most important positions in the new government will be the Minister for the Rehabilitation of Politics. She will lead national action to return politics to the situation in which it can again be respected and taken seriously. She will give the Productivity Commission a reference on The nature of truth in public policy, the meaning of a political mandate and the Keynesian Principle of Altered Circumstances (KPAC)1. A Summit will be called in the first 100 days at which parliamentarians and media representatives will chart a new course for interviews relating to public policy matters, using the interview between Kerry O'Brien and Clive James as a case study in how true opinions may be decently canvassed. Legislation will be introduced under which harsh penalties will be meted out to workers in the media who rush along as if no matter is important enough to spend real time on; who engage in 'gotcha moments'; who interrupt their interlocutor; and who wilfully misrepresent any matter, however important, on a front page.

Within 100 days the public will again trust and like their politicians and the political process. Policy issues - big and small - will be discussed in pubs and restaurants the length and breadth of the land, and all of those who spoiled their ballots on 7 September will feel slightly ashamed.

2. To confirm Australia's economic strength
The new government will confirm and finally convince the nation's citizens that Australia has one of the strongest economies in the world and that the major debating point for both major parties in the campaign was based on a false premise. Without complacency, governments will project a calm, measured confidence in economic matters, further strengthening the inflow of capital to Australia and encouraging domestic households to spend.

At the same time, reflecting prudent economic management and respecting the intelligence of the citizens, it will lead a mature and broad-ranging debate on the nation's taxation and spending regimes. The people will understand the need for the nation not to be complacent, to be brought to a broad understanding of Australia's position compared with other developed countries in relation to tax and the effectiveness of public expenditures. Within 100 days the foundations will have been laid for action to fix Australia's medium-term structural economic challenge.

3. To confirm investment in the Legacy

Within 10 days the new Government will have reaffirmed its intention to invest at the scheduled rate and duration in the National Disability Insurance Scheme, improved dental health services, a reformed aged care system, and in schools funding according to educational need.

Like the confident and open economic management mentioned above, these commitments will boost economic growth and – more importantly – do wonders for the wellbeing of the people of Australia, particularly those in groups that are currently disadvantaged.

4. To require health to be on the front pages
Within 100 days the fact that Australian citizens care a great deal about health and health services will be evident from the priority given to public policy in the area by all media outlets. It will soon become apparent that the elements of the health and wellbeing debate that concern most people are:

5. To place people at the centre of health policies
Within 100 days it will have become apparent that people are at the heart of health policy, not companies. There will no longer be the fear that where private health insurance, medical research and medicines are concerned, the fate of commercial entities is more important than patient condition.

Roll on the 44th Parliament and the new ministerial appointment. We can't wait.