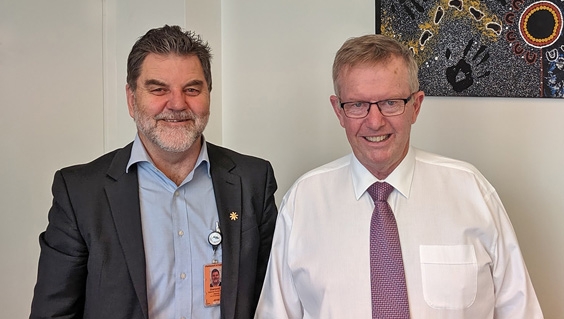 The National Rural Health Alliance has met with the new Federal Minister for Regional Services, Decentralisation and Local Government in the Coalition Government, Mark Coulton, to urge him to focus on improving rural health services.

Outgoing NRHA CEO Mark Diamond said Mr Coulton, who has held the rural seat of Parkes in north-west NSW since 2007, had told him that he was committed to trying to make a difference to improving health outcomes for people in rural areas.

“We wanted to clarify where rural health sat and who would be responsible for it in this Federal Government, given that Australia no longer has a Minister for Rural Health.

“Mr Coulton reassured me that although rural health is no longer in any Federal ministerial title, he certainly considers rural health to be a major focus.

“He clearly believes the health of the seven million people living in rural, regional and remote Australia is a top priority.

“We discussed the issues that country people experience daily – difficulties in accessing health care in ways that enable early diagnosis and treatment, the importance of promotion, prevention and early intervention and why many people don’t take action to look after themselves and their families in the bush.’

“He has a very good understanding of the issues that rural communities face. He has spent many years in Local Government and a lifetime in an electorate which in many ways typifies the breadth of issues experienced across rural Australia – including problems with the supply and distribution of the health workforce and difficulties in getting the infrastructure in place to enable things like telehealth and telemedicine.

“He has had hands-on involvement with these things – he knows the issues. There is no doubt he is committed to trying to make a difference to improving health outcomes for people in rural areas.

“He believes he is extremely lucky to be given this chance and it is clear he will take up the role with real determination.

“In return, I have pledged the support of the Alliance in helping him to do exactly that.”

The meeting was one of Mark Diamond’s last as NRHA’s CEO. He steps down from the role this Friday June 28.