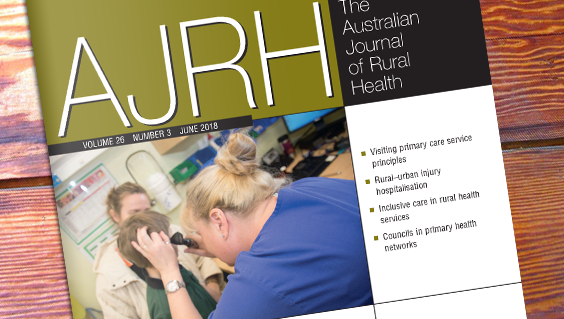 A third of country people suffering moderate to high psychological distress don't think they have a mental health problem.

That's the striking finding of research about to be published in the Australian Journal of Rural Health, the National Rural Health Alliance's peer reviewed journal.

Two and a half thousand people were surveyed from across rural and remote New South Wales by researchers at Newcastle University and Hunter New England Mental Health.

Respondents were asked if they'd experienced any mental health problems in the past twelve months, and then filled in a questionnaire that measures psychological distress.

472 people reported moderate to very high levels of psychological distress in the past twelve months.  A third of these people did not report any mental health problems.

They were mainly married women who had a job.  About half of that group were 55 years or over.

It shows that a significant portion of country people have problems identifying mental illness.

A previous benchmark survey was conducted seven years ago called "Public recognition of mental disorders and beliefs about treatment". It also found that Australians have difficulty recognising the symptoms of mental illness, but most of the respondents were from urban areas.

The new study said that mental illness in rural areas is often under reported because of the lack of mental health professionals working in the country.

But it noted that rural people are less likely to seek help even if services are available.

The study said "poor mental health literacy" is a critical barrier to country people getting the help they need.

It adds that country people are reluctant to acknowledge distress as a problem, and have a tendency to associate ‘mental health problems’ with severe disorders that might require hospitalisation.

This article has been made open access for six weeks.

To receive a free subscription to the Journal, join Friends of the Alliance.  Support the work of the National Rural Health Alliance and help improve the health of the 7 million people in rural and remote Australia.