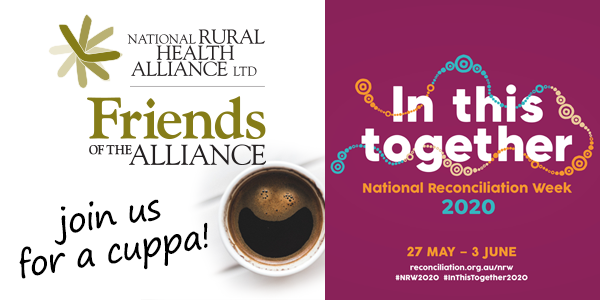 This is the end of the sixth week working from home and the fourth Friends cuppa session.

During the session Josh Arnold from Small Town Culture, armed with his guitar and a plate full of lamingtons, surprised everyone with an impromptu performance of ‘Build ‘em up!’. Everyone thoroughly enjoyed the performance and there was much silent applause (because everyone was on mute!).

Gwenda Freeman chaired the session and was zooming in from Avoca in Victoria, west of Marybourough and an hour north of Ballarat. Gwenda acknowledged she was on the lands of the Dja Dja Wurrung people where she is still working from home. Gwenda was having coffee in a mug she was given by her children.

Peter Hughes, having difficulty with his sound, zoomed in and phoned in via the phone at the same time. Adrian Schoo offered a zoom tip – if you are on mute all you have to do is hold down the space bar to unmute while you speak.

Adrian Schoo also on Dja Dja Wurrung Country in Bendigo is a retired clinician (physiotherapist) and is still research active. Adrian’s eldest son lives in Halls Gap not far from Gwenda in Avoca.

Irene Mills was zooming in from Dalwallinu WA, home of the Badimaya people. Irene said it was very dusty dry and cold at the moment with a wind coming in from the east. WA is still in lock down with some easing expected in the coming days. She said life is pretty ordinary at the moment but she is fit and well.

Donna Hancox – a researcher from the Queensland University of Technology in Brisbane, home of the Jagera and Turrbal people. Donna said it was a brisk morning in Brisbane compared to those in the south. Donna’s work includes researching arts, public health and social impact and she was very pleased to be able to join this cuppa session.

Sandra Gattenhof - a colleague of Donna’s and also a researcher at the Queensland University of Technology. Sandra’s work is around arts engagement and social impacts from rural communities. She said it was lovely to be here.

Chris Moorhouse - zooming in from Tasmania, home of the Palawa people, the oldest continuing culture in the world. Chris introduced his friend the thylacine who was featured on the front and back of his shirt. Thylacines, now extinct, are one of the largest known carnivorous marsupials, evolving about 4 million years ago. The last known live animal was captured in 1933 in Tasmania.

Chris said there had been some unfortunate developments in Tasmania with the main incident in Burnie not far from Chris in Chudleigh. He said there was a lot of stress in his neighbouring communitiesand while he is pleased the numbers are looking better nationally the numbers locally are not pointing down. He commented what difference a small number of individuals can make in the progress or decline. He hopes things will improve next week.

Eddie Guinness, was on the lands of the Wurundjeri people of the Kulin Nation in Melbourne. Eddie is the Project Co-ordinator with Regional Arts Australia and prior to the lockdown was working with on their Creative Regions National Summit, and has worked on the Artlands 2018 project.

Felicity Gemmell-Smith - pleased to be able to join this group again this week.  Felicity works with GP Synergy and said it was freezing cold and her dogs and horses were all rugged up. She said it has gone from 30 degrees to 2 degrees with a westerly wind.

David Lindsay - zooming in from sunny Townsville, where the Bindal and Wulgurukaba People are the first people to have lived in the region.  David said it was a balmy 28 degrees with clear blue skies and normally the town is full of grey nomads at this time of the year.  Looking down the road (some 1,300kms away) where it looks like Josh was freezing his butt off, he said it was “the BEST place to be at this time of year”!   David was pleased to hear things are going well in Western Australia as he has plans to visit in October for the AFL Masters National Carnival – hoping that might be able to proceed. David is a Professor of Nursing at James Cook University for the past 23 years and said was good to be part of this group and back involved with the Alliance again.

Adrian reminded David that exercise is never for nothing and you will always reap the benefits!

Hannah  Dolling - said it was nice to see everyone again while she was in freezing Mansfield, Victoria with a lot of snow about. Hannah is the Executive Manager at Primary Care Connect in Shepparton and said she is pleased to be able to keep their doors open during COVID.

Rosemary Young - sitting in front of a beautiful vase of roses from her garden, was on the lands of the Gundangara people in the Southern Highlands where it was 5 degrees – but they were expecting 7!  She said it was nice to have some proper autumn arrive, and they received some much needed rain on the weekend.

Lynne Strathie - on Larrakia Country, looking as glamorous as usual also in front of a beautiful bunch of flowers from her garden. Lynne said there were big thing this week in Darwin this week with some easing of restrictions – which will be nice as it is long weekend. Lynne received her walking frame this week which will mean progress for Lynne who doesn’t feel 70 and frail.

Vandana Bhagat – is of the Friends of the Alliance Tasmania representatives.  Vandana works for the University of Tasmania, Centre for Rural Health. She really enjoyed the beautiful song from Josh which helped keep her spirits up.

Rachel Yates– Chair of the Alliance also on Ngunnawal Country in Canberra.  Rachel’s day job is a Policy Director with Universities Australia.  Rachel shared a drawing of her son which was done in Paris to remind us of days when we used to be able to travel.  Rachel said she also loves ‘Build ‘em up!’.

Peter Hughes –representing the Regional Medical Specialists Association zoomed in from Ngunnawal Country in Canberra where he was locked down tight.  He reported there has been a few deaths in the ACT but all were traceable to international travellers.

Janine Turnbull – a member of Alliance’s Programs and Events team.  Janine zoomed in from just outside of Canberra on Ngunnawal Country where it was freezing as well.  Janine’s three dogs are enjoying having her at home – particularly now she’s lit the fire.

Gordon Gregory – lives on Ngunnawal Country in Canberra and used to work at the Alliance.

Leanne Coleman – on Ngunnawal Country eagerly waiting the arrival of her second granddaughter!

Gordon commented that music is in a very competitive this space on social media at the moment, but he believed ‘Build ‘em up’ is really good and encouraged everyone to get behind it.  He believes it will do great things for rural health communities in Australia and he was about to go dig out is larger phone.

Peter Brown – works at the National Rural Health Alliance.  He is the Manager of the Australian Journal of Rural Health, and also works on arts and health, governance and Indigenous reconciliation and he said it was great to be part of this meeting.  He said he was delighted to see the State Library of NSW acknowledge that the Gweagal people  of Kamay discovered James Cook and the Endeavour in 1770 - https://www.abc.net.au/news/2020-04-29/captain-cook-landing-indigenous-people-first-words-contested/12195148  He thought it was a wonderful way to lead into Reconciliation Week.

Gwenda reminded everyone that National Reconciliation Week will commence on 26 May 2020.

Next catch-up 10.30am Friday, 8 May 2020
If you are interested in joining next week, email [email protected] and we will send you the link to log in.