Snakes: "harmless and cute - but not on the verandah" 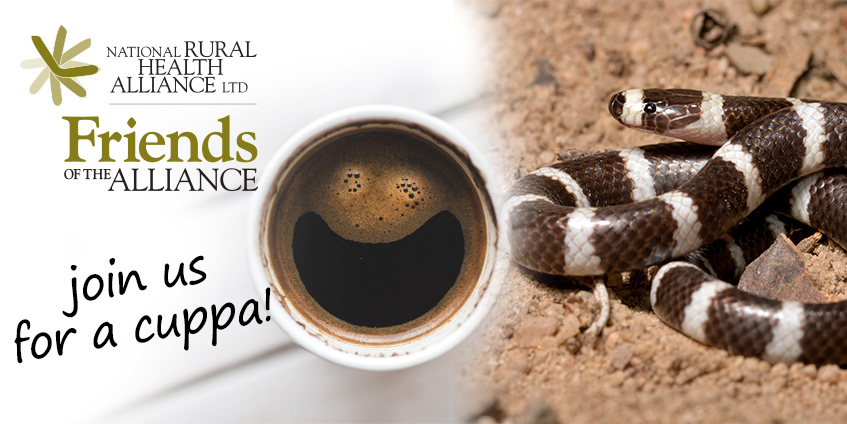 Gathered around the billy this week were Wendy Downs, Lily Sher, Lynne Strathie, Linda Beaver, Adrian Shoo, Gordon Gregory, Rachel Yates, Felecity Gemmell-Smith, Renee Strazzari, Sue Pagura and Janine Turnbull. They reported mixed emotions about working from home and the possibility of becoming 'Zoombies', while several said they had enjoyed having more peace and quiet than usual during the lockdown.

Chair of Friends of the Alliance, Rachel Yates, welcomed everyone and acknowledged the Ngunnawal people as the traditional owners of Country where the Alliance is situated and all other lands around the country. We recognise their continuing connection to land, waters and communities and pay our respects to Aboriginal and Torres Strait Islanders past and present.

Jennifer Pink from the Society of Hospital Pharmacists of Australia (a Member Body of the Alliance) sent a virtual cheery hello from a misty grey Adelaide. Jennifer would have loved to have attended this morning but work demands got in the way!

Rachel really enjoyed last week’s cuppa around the theme of International Nurses Day and thought today we could think about International Respect for Chickens Month, Supermarket Free month where we aim to buy locally, or WOW Day, on which  we celebrate State Emergency Services.

Rachel reported that one of the issues raised at this week’s Friends Advisory Committee meeting was the opening up of the borders and concerns about COVID-19 spreading into under-resourced rural communities.

Rachel welcomed Renee from Rural and Remote Medical Services – a new member of Friends of the Alliance.

Renee Strazzari is a GP from Coffs Harbour and also does non-clinical work as Director of the Mid-North Coast Regional Training Hub and clinical lead on health pathways and also the RACGP NSW/ACT on the Rural Council working on rural and regional workforce issues.  Renee’s long term dream is to work in a remote area. She was born in Australia, but grew up in West Indies 'on a small island' [half your luck Renee!] and so is used to remote communities but likes being near the water. Renee has a 3 year old and 5 year old at home and is enjoying the home schooling!

Felicity Gemmell-Smith from GP Synergy reported that she and Renee are working on a couple of projects together at the moment. Felicity was sitting in front of a photo of “Bubby Roo” who was rescued during the drought when her mother abandoned him. He is a baby red boy who will grow to about 2 metres tall – is now at roo school with Elaine Anderson 80km north of Moree. While it is green on Felicity’s 100 acres in Moree they are still in drought as it is so dry underneath the topsoil. She has let her land go back to nature - it has been untouched for 30 years and there are plants coming back that haven’t been seen since the 1960s. With hindsight Felicity wishes they had bought more land so they could help save more wildlife.

Lynne Strathie was a tad unpopular in her sleeveless top while the southerners were rugged up around their computer screens! She was very pleased to report she is no longer in isolation in Darwin and went out to dinner with her daughter to her local Chinese restaurant last night. Lynne said dining was interesting with lots of space between tables but it has been wonderfully quiet during lockdown with less traffic and airport noise. Lynne reported enjoying 27 degrees but felt it was a bit chilly for Darwin so she had to put her slippers on this morning and put the booster on for her solar hot water system.

Wendy Downs retired due to ill-health and feels very isolated. She really misses going to work and the social activities. She enjoyed working on the RHCE2 project at the Alliance and on the Medicare Review in the Department of Health and prefers to be in a social environment and would love to be back at work. [The Alliance team miss her and would love to have her back too!] She also misses her family and grandchildren and while content for her husband to do the shopping while she sits in the car, even that has lost its gloss!

Rachel thanked Wendy for sharing and acknowledged that many would be feeling the same.  She referred to the value of these cuppa sessions and asked if people would like to continue post-COVID - everyone agreed that that would be good. Felicity said she finds it “awesome” and would love it to continue – she said “it is like the networking at a conference without leaving home!”.

Felicity said it was freezing in Moree but positives to come out of COVID include less road kill and being able to see the night sky without so much air traffic. Felicity also reflected on conversations she has had with local parents who are enjoying a more relaxed time with their children without the pressures of driving them around all the time. She thinks the children will benefit from this time in isolation.

Rachel agreed it has also been a difficult juggling act for parents trying to work and look after young children at home at the same time.

Gordon Gregory apologised for fussing around earlier on as he tried to find some social-distancing space after being kicked out of the kitchen by his wife at home. Gordon commented that the past few weeks have seen a complex process of policy making laid bare. On a daily basis there has been scientific evidence for political leaders to balance, on the one hand, saving lives, and on the other hand, the economy.  In fact lives (or, more accurately, Disability-Adjusted Life Years) are the measure on both sides of the equation. It is lives affected by COVID-19 balanced against lives affected by the economic changes. The only decent measure of an economy is what it does for people.

He continued to reflect that the economists making themselves unpopular at the moment are those saying that greater economic damage will cause more loss of DALYs - and this is true. The politicians have to judge whether one notch looser with the lockdown will lead to more or less loss of life from the virus than are gained from the extra economic activity that results. Margaret Thatcher is remembered, rather unfairly, for saying there is no such thing as society, only an economy. What she actually said was there was no such thing as society, but there are individuals whose first duty is to look after themselves, and following that their duty is to look after their neighbours.

He speculated about a situation in which our political leaders were exposed every day to information about, say, public housing and held accountable for decisions on it. We would all agree that it is shameless that in Australia we have so many homeless people. Imagine if the decision by the Government was how much to invest in public housing and rental accommodation. Imagine if on a daily basis the Premiers, the Prime Minister, and the experts came out and gave us the metrics.

The situation has exposed the complexity, the relationship between science and political decisions, the difficulty of politics and what is best for the people.  He said he was fascinated by how the current situation has opened up the reality of politics. Gordon said the point of his rant is that the Alliance’s purpose is to be involved with this complexity, to influence decisions made by the government - strength to its arm because this is important work.

Rachel agreed that the pandemic situation has shone a light on policy processes and if we had the spotlight on other issues and processes - if there was intensive media tracking and commentary like we have on COVID - it would be a very different situation.

Linda Beaver said that people living in and near the Snowies are divided on the question of whether it will be great to have a full-on ski season, while others are asking whether we really want this enormous influx of people to a place with limited health resources (the hospital is an hour away and has no ICU). There are mixed views about the  relaxation of travel in regional NSW as it will impact on opening the resorts. Yes there will be an economic benefit in the community from  tourism but there is still the fear of COVID-19 cases in this area. What is the response going to be? It's politics vs business vs people vs income vs health. Lynne said this is the argument that has been raging in the Territory.

Felicity can understand the caution because she too is in an area with few facilities to cope with a significant spread of the virus and they don’t know what’s coming into the town. They have people in high risk groups and no ICU beds. "The minute things were relaxed everyone threw social distancing out the window" and a local GP has warned “watch out for July!”

Lilya played devil’s advocate and asked where the money would come from for all the programs to boost the economy. The ambulance sector has seen a dramatic increase in mental health call outs from people with depression because of their economic situation.

Adrian Shoo said it reminds him of complexity theory. It is a good thing to be aware of the different trade-offs and the fact that any one solution might create another problem. He used telemedicine as an example where there has been enhanced access and equity to services, particularly in rural and remote, and now we want to keep this service. But we do not want to be in a situation where all the services are provided by people sitting in offices in the city.

Sue Pagura said she enjoyed and appreciated this insightful conversation and will ensure these comments are passed on to the Alliance. Sue is still enjoying working from home with her husband, two sons and dog.

Janine Turnbull was enjoying the meeting and busy taking notes and said she was looking forward to having some chickens at home at some time in the future when she’s not so scared of snakes!

Gordon said he was born on a 300-acre mixed farm in Somerset in the UK. Felicity referred to a book by an English journalist John Humphreys about changes of agricultural and food production and the clearing of hedge rows – The great food gamble. Lynne said when she was in Cardiff in the UK they used to go camping in Tenby and the drive from Cardiff to Tenby had beautiful rhododendrons growing in the wild! Felicity recalled fond memories of her rural childhood where she had total freedom from dawn to dark. She had recently seen a small bandy bandy snake - "harmless and cute".  The consensus was that snakes are not so bad as long as they don’t come on the verandah!

Felicity summed up by saying that Nature is probably enjoying COVID. She thanked Friends for these sessions that have helped with her social isolation and she looks forward to next week.

If you‘d like to join in one of these weekly social chats email [email protected] and we will send you the link.

See you all next week.