Paying tribute to the ANZACs, the ABC and digital health 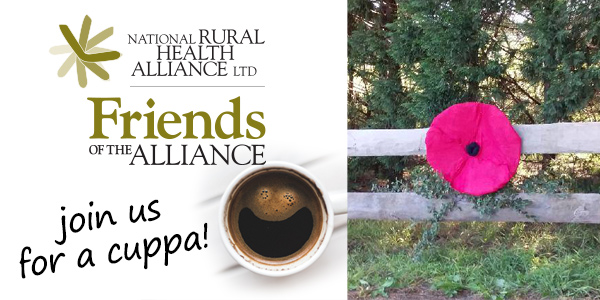 On the eve of ANZAC day 2020, a group of Friends of the Alliance gathered for our weekly cuppa during this time of isolation!  The meeting was warm and full of gratitude and respect for the armed forces and the Australian Broadcasting Commision (ABC).

David Lindsay from Townsville opened the meeting by paying his respects to Aboriginal and Torres Strait Islander people and the various lands on which we were all meeting.  He also acknowledged the role Aboriginal and Torres Strait Islander health professionals play in rural and remote communities. He said  how wonderful it was to see some familiar faces and that ‘rural health’, in whatever capacity you may be working, can be a lifetime career.

Lynne Strathie from Darwin reported she was enjoying spending time in her garden, cooking, composting and growing all sorts of wonderful produce. .  Lynne's father was in the Royal Navy in World War II – his ship was bombed and only he and the captain survived.  Lynne will be remembering her father and grandfather this ANZAC day.

Gordon Gregory, sitting in front of his beautiful antique pharmacy cabinet, acknowledged the important role the ABC played over the summer and during this pandemic.   He hopes  that one positive outcome of all this would be continued and increased funding of the ABC as a vital and valuable institution – particularly for people in rural and remote areas. He commented on  the critical role Norman Swan has played leading the charge on COVID-19   for the ABC.

Felicity Gemmell-Smith and Rosemary Young added comments about the importance of the ABC and regional media outlets that are disappearing and the value of importance of reliable media that accurately report on health issues.  Rosemary relied on the ABC over the summer as she stood in her driveway watching the embers fall.  Rosemary shared her beautiful poppy that she will be putting on her front gate on ANZAC day while she remembers her father who was in the navy during both world wars.

Ed Johnson, co-Founder and Chief Clinical Officer, Umbo, Blayney in NSW - www.umbo.com.au. On ANZAC Day Ed will be thinking about family members who have served in the past and also his friends who are currently serving in the Middle East.

Thinking about the current pandemic, life has not changed that much for Ed although  his digital practice that provides telehealth services has quadrupled.  While he is on a very steep learning curve, he acknowledged that all health professionals are in the same situation and he feels he is walking alongside his colleagues in this journey.  Ed felt it was also important that as a society we look more closely at our relationship with the environment and animals.

There was discussion about the importance of telehealth services and how beneficial they can be, particularly in rural and remote areas.  However, several people emphasised  that telehealth should be seen as a supplement, not a replacement for face-to-face interaction.  Some  health consumers are happy to use digital solutions but only in the short term.  There was also concern about the current use of digital health for emergency services and whether this might continue post-COVID.

An interesting aspect to this debate was whether millennials will have the same attitude towards digital health or may  think differently.  Ed, as the only digital native in the group, suggested there may be a societal change in attitude rather than a generational one.

Robyn Adams is currently working for Health Workforce Queensland on a rural generalist allied health project and organising the upcoming SARRAH Conference that was scheduled to be held in Townsville in November 2020.  Here is a link to the SARRAH Conference  - www.sarrahconference.com

Robyn said living in a barracks town (Townsville) ANZAC Day is very real and they are phenomenal and awesome!.  She is extremely supportive of those in the services, particularly during emergencies like the floods in Townsville.

Felicity Gemmell-Smith reiterated that the ABC is an essential service country Australia.  Felicity is the Special Education Programs Manager with GP Synergy and manages defence force registrars.  Felicity said it was humbling to work with defence personnel and she also admired the support provided to them by their families.  Felicity has a light horse family background and she is very grateful and will be remembering them on ANZAC day.

Irene Mills said she will miss the gunfire breakfast in Dalwallinu this year.  She plans to take her cuppa to the verandah and remember her   father who was a soldier in the war.  Irene encouraged anyone visiting Albany, WA, to visit the National Anzac Centre - http://nationalanzaccentre.com.au/ - she said it “was the best museum you will ever come across”.

Chris Moorehouse reported it was pleasing the COVID-19 situation in Tasmania is settling down.  This week Chris has been reflecting on the concept of gratitude in different contexts and he was delighted with the outpouring of gratitude in this gathering today.   Chris is very proud of his son's service in the armed forces  and he will be thinking of him on ANZAC Day.

David closed the gathering by saying that also living in Townsville, he saw first-hand the support of the army during the floods and he drives past the barracks every day on his way to work.   David’s father-in-law served in the Middle East and his own father was a cadet in Western Australia when he was a teenager.

David plans to watch the dawn service early and remember the contributions and sacrifices made during both war and peaceful times.

Alliance staff in the session included Gabrielle O’Kane, Janine Turnbull zooming in from her rural patch just outside of Canberra, Peter Brown, and Leanne Coleman who was waiting for her second grand-daughter to be born.

Next catch-up 10.30am Friday, 1 May 2020
If you are interested in joining next week, email [email protected] and we will send you the link to log in.