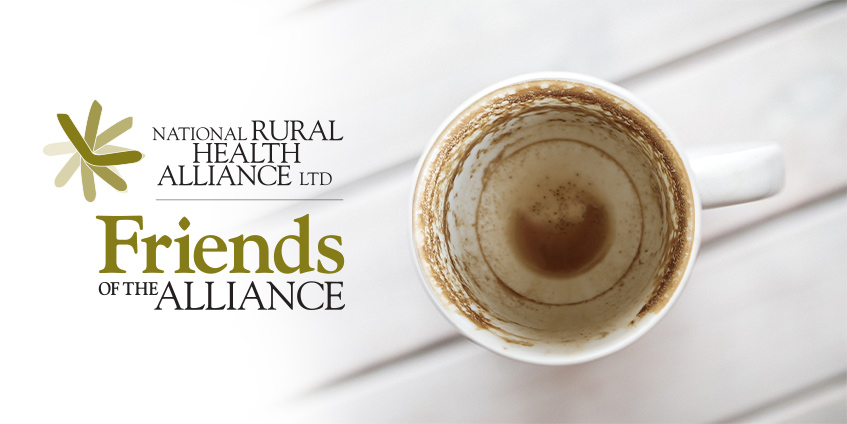 Thank you for being in touch! After 14 weeks of catching up from our homes, we will be taking a break from our Friends cuppa sessions. When the lockdown started, a weekly Zoom catch-up was a chance to exchange views on how the pandemic was affecting people in rural areas and to support each other. Over the weeks we’ve discussed many issues, from chickens and snakes, to reconciliation and the importance of local media.

We supported Josh Arnold in his wonderful work on the Friends musical collaboration and were blessed with a live performance by him of the final ‘Build ‘em up!’ anthem.

The Friends Advisory Committee is meeting in mid-July and Rachel will report on the value of the cuppa sessions and mention some of the key issues raised.

Rachel acknowledged the Ngunnawal people and paid her respects to Elders past, present and emerging. She then gave a special welcome to Colette Colman, the new Director of Policy and Strategy at the National Rural Health Alliance. Colette thanked Rachel and said they were fortunate to meet face-to-face in the office this week. Colette came to the Alliance from the Independent Schools Council of Australia, a national peak body. Prior to that she worked in the Departments of Education and Health. Colette has worked with Wendy before so was pleased to cross paths with her again. Colette’s first task for the Alliance was writing a submission for the House of Representatives Standing Committee on Indigenous Affairs’ inquiry into food pricing and food security in remote Indigenous communities.

Lynne, suffering from pneumonia, had been interviewed on Drive about ‘What’s for dinner’. She spoke about her marinated steak, with greens and veggies from her garden! The discussion turned to returning to office work, the COVID-19 situation in Victoria, Black Lives Matter, and the economic impact in rural areas. Lynne reported that, for the first time in Australia, the Territory has an Indigenous Speaker and Deputy Speaker in their Parliament. And Chief Minister, Michael Gunner, has decided to open the borders on 17 July despite some pressure not to do so.

Gordon, the ghost of Christmas past, welcomed Colette to the Alliance and wished her well. He said yesterday was a huge shock because of the 6000 jobs lost from Qantas and with its CEO, Alan Joyce, saying international travel will not resume for two to three years. The COVID-19 situation will affect us all for a generation, with the economic impact on rural communities likely to be mixed. The realisation that people can work from anywhere could have a positive impact on rural communities – smaller and medium-sized communities might grow. However, the huge question is how the economy will change. In part it will still be based on coal, iron ore, wheat and wool – so long as shipping is not interrupted. But what new industries might emerge and grow, and to what extent will they be in rural areas – eg renewable energies?

Peter Hughes, from the Rural Medical Specialists Association, congratulated Colette on her excellent food pricing submission. Peter is particularly interested in community gardens, which have a role to play in helping to get fresh fruit and vegetables into rural and remote communities.

Wendy followed up on her comments from a previous meeting where she raised the issue of the loss of rural newspapers. Since then there has been a huge disturbance in rural communities, but at the same time the Yass area are getting a new newspaper. Sue Wade is also concerned; Forbes has 9000 people but no local paper. Some information is available on Facebook but many of the elderly are not on social media. She suggested that this is a matter on which local MPs should be lobbied. COVID-19 has had a huge impact on the towns in her area despite the fact that there have been no local cases. Small towns depend on tourism and passing traffic and without them more businesses will close, particularly in areas affected by drought, bushfires and now COVID-19.

Sue said that the cuts to the ABC were making matters worse. Gordon questioned why more use isn't made of localised social media. Sue and others pointed out that many people do not want to use social media for a range of reasons including inferior reporting, security issues, poor internet access and not being able to afford a device to access it.

Leanne reported on plans for an online Friends community portal where members can network and share ideas.

Invoices for 2020–21 membership of Friends will be sent out on 1 July.

The food security webinar is on Monday 29 June – www.ruralhealth.org.au/events/webinar/foodsecurity.

Rachel thanked everyone who has joined these sessions over the past weeks and wished them well as some return to work. The sessions have been a rich source of rural intel for the Friends Advisory Committee.

Stay safe, stay connected, and keep in touch with Friends via [email protected]