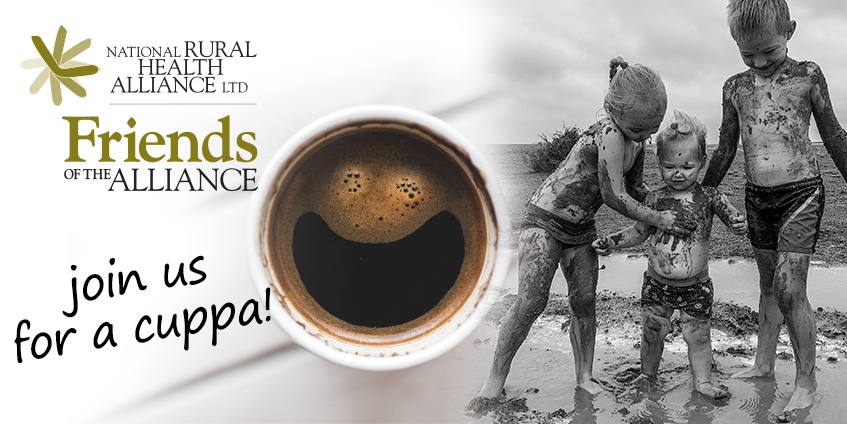 Ans van Erp welcomed everyone and acknowledged traditional owners, past, present and emerging. It's Carers Week in the UK and Ans paid her respects to the 2.6 million carers in Australia.

Ans welcomed Josh Arnold to the Cuppa and thanked him for the opportunity to participate in the musical collaboration of ‘Build ‘em up!’. She has shared it widely with family and friends, including overseas. Watch video: https://www.youtube.com/watch?v=zV99-FohbbI

Josh thanked Ans for the introduction and for pouring heart and soul into her dance contribution to the video. 'Build 'em up!' is special because it paints such a positive picture thanks to the input of many people from rural communities. The lyrics were especially inspired by a woman from the store at The Gums in Queensland. It has one school, one church, one hall, two silos and the store. Her words summed up the whole experience and showed how people in rural and remote Australia are coping. She stayed open during the hard times, even though there were no customers, to help people feel better. Josh felt it was it was so nice to see such humanity and her will to help people.

Martin intends to share the video with his rural networks as well as his family in Ireland.

Josh reflected on his time in isolation. It's been frustrating and he has missed interacting with people. He's pleased to be out working with kids in schools again. He is currently working on another video collaboration and is seeking photographs of rural men and boys to be included in a video of him and Lee Kernaghan performing ‘Thank god I’m a country boy’ – details on Facebook at: https://www.facebook.com/watch/?v=601008107483339

Martin said he too is pleased to be out of lockdown. He has delivered two B Doubles of hay to farmers in Bairnsdale. They are helping 135 farmers in the community. The farmers are grateful to receive the hay, while Martin is pleased to be able to meet with them to get a better understanding of their mental health. [So it's a winnow-winnow situation.] While online communications have been great, being able to sit around a kitchen table again with kids coming in and out has reminded him how nothing beats meeting face-to-face.

Wendy is still staying home due to her health issues and has found the past few months very lonely. She is really looking forward to getting out again and having coffee with friends, shopping and going to the library.

Adrian has spent much of his time in isolation doing jobs around the house. Life after COVID will no doubt be different. Rotary have embraced Zoom board meetings. Some people prefer working from home and will continue if they can. Businesses may no longer need such big offices and will be more aware of how to respond to epidemics. We must all work to prevent a second spike.

Josh asked if it's true that kids who are too protected from 'grubs and bugs' may not have well-developed immunity systems. Adrian said being too clean has been associated with allergies so we have to be careful. COVID 19 is a different virus to the ones we have been exposed to in the past. Ans said nurses would be pleased that the benefits of good hand washing and hygiene are now clearer to everyone.

Irene is involved in the National Flu Monitoring Program. This year’s incidence of flu is down some 40% - possibly due to extreme hygiene that everyone has been practising. In her local community there has been minimal fear of contracting COVID-19. There has been more concern about lack of sport and socialisation. Zoom meetings are all well and good but we need face-to-face contact.

Ans said it has been good to witness the way people have been reaching out to help each other at this difficult time. Adrian agreed. The increased use of telemedicine is fine but will not lead to an increase in health professionals in rural communities.

Gordon said that both he and Alpha, his wife, have reached out to their siblings overseas via Zoom. These Cuppas give retirees the opportunity to engage with people living in rural areas. The critical thing now is to wait another ten days to see if there is going to be a COVID-19 spike following the demonstrations. If there is a spike it will slow down the economic opening; if there is not some people will challenge the reasons for the lockdowns in the first instance. Developments in the next two weeks will be critically analysed by policy makers.

Ans referred to the tourist season around the corner. Sue Wade, who lives on one of the main north-south highways, said the caravans are massing and the van parks are filling up. Small towns are dependent on this passing trade. Forbes is losing its Target in 2020–21 and the Target store in Parkes, half an hour away, is to become a K-Mart.

Irene said that in Western Australia some regions were re-opened three weeks ago, while the Kimberley and Pilbara opened just last week. The caravans are already lined up for miles and the caravan park in Exmouth filled up overnight. The WA Premier is determined to keep the borders closed as long as possible. About 80 per cent of the community who responded to a survey wanted to keep the borders closed until after the result of the demonstrations was clear and it was safe to do so. (WA has always wanted to secede from the rest of Australia, so this is no big deal)

Chris was on the Cuppa from the lands, waters and mountains of a beautiful part of Tasmania, looked after by the Palawa people for thousands of years. It is geographically and culturally a very diverse area of Tasmania. One of its traditions has been the coming together of people around the confluence of the rivers. At a time when there was tribal warfare elsewhere people in this area were coming together in peace and harmony, and used ochre widely for ceremonial purposes. In contrast, the local area was also the scene of some awful things perpetrated on the Traditional Owners.

Chris thanked Josh for his fabulous work bringing us together, in music and song, to represent and celebrate the bush.

Sue said she is concerned that drought has been forgotten. A lot of people have no money and are borrowing heavily to put in crops and buy stock. Martin suggested that the issue of water trading and licensing in the Murray–Darling basin needs to be investigated. Sue agreed, referring to last night’s 7.30 Report. People who don't have land should not be permitted to trade water. The issue requires national (cf State) management.

Janine has appreciated these sessions. She is still working from home in Canberra. She mentioned the particular challenge for the businesses of the south coast of NSW which were so badly affected by drought, fires, smoke and then COVID-19.

Lynne joined the Cuppa in the hope that it would lift her spirits. She has not been well.

Leanne flagged Queensland University’s Linkage project that will include a series of online activities in July on ‘The Role of Regional Arts: a social impact model’. They will provide an insight into how communities think about arts and culture, place, who gets to participate and what local challenges they face.  Details of the project will be circulated.

The electorate of Eden-Monaro has been hard hit by drought, fires and COVID-19. It will be interesting to see how the voting public respond to these matters when it comes to the by-election on 4 July.

Leanne referred to the Alliance’s food security webinar on 29 June: www.ruralhealth.org.au/events/webinar/foodsecurity. Lynne said that remote communities pay high prices for fresh food and the Indigenous mob were healthier when they could rely at least in part on their own foods and systems.

Irene Mills mentioned Sabrina Hahn (https://sabrinahahn.com.au/about/) who has been running training in the Kimberley to teach kids to grow vegetables in the community.

Martin thanked people for sharing thoughts again and Ans thanked Friends of the Alliance for the opportunity. She thanked Josh again for his musical collaboration, and closed the Cuppa by sending warm wishes to those in the cold south.