The politics we want 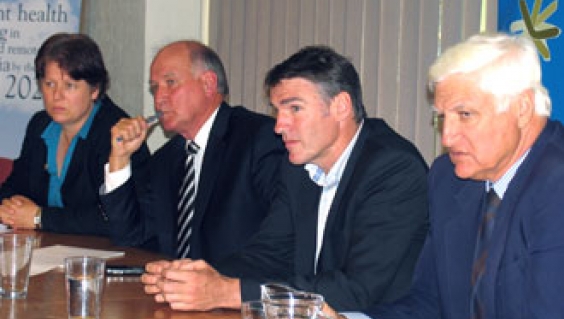 Independent Tony Windsor, Rob Oakeshott and Bob Katter meet with the National Rural Health Alliance in the week after the Federal Election 2010. Also pictured, Jenny May, Alliance Chair at the time.

Politics in Australia has got itself a singularly bad name. And without the likes of Tony Windsor, Judi Moylan and Rob Oakeshott, who is going to lead its rehabilitation?

Despite its under-valued success in enacting important business, the 43rd Parliament has failed to halt the slide in the reputation of politics and of many of those who engage in it. The leaders and managers of the major parties must take the responsibility. To the ongoing turmoil of the Labor Party's leadership situation has been added the persistent refusal of the Opposition to fully accept its status as an opposition and the validity of the elected Parliament.

It is ironic that Tony Windsor and Rob Oakeshott, who have resolutely provided the support the Gillard Government has needed in order to govern, made improved parliamentary processes an important part of what they required for cutting the deal. The Parliamentary Budget Office has been strengthened, which should mean greater clarity about the cost of commitments made in the election campaign. There has been a significant focus on regional health infrastructure - not just in New England and Lyne - and the two have played a key role in nation-building changes in taxation, disability and education. But many of their aspirations for improved parliamentary processes and behaviour have not materialised.

The Parliament now ending has been industrious, including on matters of interest and importance to the people of rural, regional and remote areas. There have been a great number of Parliamentary Inquiries, including those of the House of Representatives Standing Committee on Regional Australia which owes its existence to the regional Independents: on the FIFO workforce; and on the Murray-Darling Basin. Senators such as Claire Moore, Sue Boyce, Rachel Siewert and Fiona Nash have done a power of work with and for the people of rural and remote Australia. But the profession within which they work is let down by its systems and the systems' managers.

But hopefully all is not lost. Here is an eight-point plan for rehabilitating professional politics in Australia.

Good luck to those who, right now, are considering a life in politics and are willing to risk some independence. We need you. And thanks to those who have tried to be better than cogs in a party machine. We understand about the personal costs but it's a great pity the wisdom of the electorate won't be tested on the value you have given.

I think you should keep

I think you should keep politics out of this and your opinion is not shared by all.

Politics is at the heart of

Politics is at the heart of this - unless of course you are naive enough to believe that political decisions relating to the NBN, DisabilityCare Aus etc do not impact upon the health of Rural Australia?

How fantastic that we can read a piece which highlights the positive aspects of politics - and presses for more by providing well thought-out and sensible suggestions - rather than moaning about politics, gossiping about the individuals within it (and their popularity or lack thereof), and arguing over political polls, like most other public news sources so regularly do.

Anyway, just which part of this piece do you disagree with, exactly?

Of course this opinion is not shared by all, but that is no reason not to put it forward. Have you ever heard of democracy?