The World Health Organisation (WHO) defines the social determinants of health (SDOH) as the conditions in which people are born, grow, live, work and age [1]. These circumstances are shaped by the distribution of money, power and resources at global, national and local levels.

Further background reading is available at the “Social Determinants of Health: The Solid Facts 2nd Edition” [2] and “Social determinants of health inequalities” [3], while the relevance in Australia is discussed in Australia’s Health 2016 [4].

Sir Michael Marmot, Professor of Epidemiology and Public Health, University College London delivered the 2016 Boyer lectures – “Fair Australia: Social Justice and the Health Gap - exploring the challenges faced by communities in solving issues around health inequality” [5]. Whether you are new to, or are fully aware of, the social determinants of health and their importance, we highly recommend listening to these lectures (or reading the transcript) – they provide an excellent overview.

But how much of the expression of a population’s health is a consequence of these social determinants? According to the British Academy [6] (reflected in material at WHO and at the Centers for Disease Control and Prevention [7]), social determinants, risk factors (like smoking and physical inactivity – which are themselves strongly influenced by social determinants), environment (eg housing and climate) and health services (eg access to primary health care services) account respectively for 40%, 30%, 10% and 20% of the expression of a population’s health – although it is probably reasonable to assume that these proportions will vary depending on the population. SDOH have a powerful influence on health.

In discussing the contributors to the health gap of Aboriginal and Torres Strait Islander peoples, Australia’s Health 2014 [8] reported that 31% of the gap was explained by socioeconomic factors (eg access to work and education), 11% by biomedical and other risk factors (eg smoking), 15% by the combined effects of both, and 43% by other factors (potentially including poorer access to services including culturally safe and appropriate services). 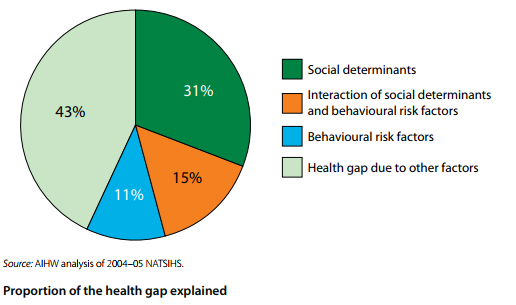 Socioeconomic status (ie average incomes, educational levels, career choices, etc) declines with remoteness, and this lower socioeconomic status is frequently cited (along with higher prevalence of Aboriginal and Torres Strait Islander people and lower levels of access to services) as one of the main reasons for poorer health outcomes for people living in rural and remote Australia. The inference is that poorer health outcomes in rural and remote Australia has little to do with rurality and much to do with the lower socioeconomic status of the people living in these areas.

But this misses the point – that employment, career opportunities and consequently education in regional, rural and remote places are restricted precisely because of the nature of towns and communities in these areas. For example[10]:

By way of occupation, the percentage of the workforce who are managers or professionals is around 40% in Major cities, around 30% in rural/regional areas and around 40% in remote areas while the percentage who are machinery operators, drivers or labourers is 14% in major cities, 20% in rural/regional areas and 23% in remote areas[11].

Many of the issues related to the level of control over one’s own life can become increasingly influential in rural, regional and remote areas. For example:

The health effects of income and educational disadvantage can be compounded in many communities by poor access to a range of goods and services including affordable healthy food, high-speed broadband, mobile phone coverage and public transport.

On the other hand, people living in rural towns (particularly small ones) have, on average, greater life satisfaction than those living in Major cities, as measured in a number of studies including HILDA [14]. This positive influence benefits health, and hints at what many who live there experience and appreciate about the peace, freedom, attachment, sense of community and connectedness that can be found there.

You can read an Alliance factsheet [15] about the determinants of health in rural and remote Australia.

You can also access the NRHA Little Book of Rural Health Numbers [16], which contains data tables and links to the original sources, for a range of rural health topics, including social determinants.

The Public Health Information Development Unit [17], Regional Development Australia’s “Insight” [18] and the ABS [19] are all good sources of online regional data including those related to social determinants.

A number of relatively recent NRHA factsheets relate to social determinants, including:

A number of relatively recent NRHA submissions relate to social determinants, including:

[1] WHO on social determinants http://www.who.int/social_determinants/en/

[15] Fact Sheet on Determinants of Health