The Federal Budget delivered by Treasurer Joe Hockey on Tuesday 13 May was the first clear marker of the Government’s approach to rural and remote health.

The Alliance’s initial media release, Rural election commitments met in ‘medical budget' acknowledged the rural initiatives to which the coalition committed in the context of the 2013 election campaign. As widely expected, there will be no additional new investment.

The Alliance is continuing its analysis of the 2014 Federal Budget and ways to ensure that rural people are considered as the measures are finalised. The most recent in the series is the discussion paper Ensuring that new Primary Health Networks will work well in rural and remote areas.

In the lead-up to the Budget the Alliance emphasised the importance of not applying across-the-board cuts to essential services, on the grounds that such changes are regressive (in terms of an individual or family's ability to pay) and are certain to impact most severely on those who are already vulnerable.

Some of the savings measures, such as those relating to unemployment benefits, tertiary education fees, and increases in the age pension will certainly have the greatest consequence for those who are already in need. The Opinion Piece Measuring the fairness of the Federal Budget for rural people considers a range of these measures. It is to be hoped that consideration will be given to fairer targeting and the operation and structure of safety nets will be monitored and adjusted to ensure that these people are adequately protected.

The seven dollar co-payment for bulk-billed visits to the general practitioner and for pathology and diagnostic imaging can be viewed through the same lens. It is those whose access to a GP is already marginal (in the sense of only just being affordable) who will be the ones to put off going to see a doctor. A new piece of work demonstrates that - yet again - it would be people in rural and remote areas (and their GPs) who would be most affected if co-payments were to be introduced across the board.

This would exacerbate existing disadvantages. Whereas 17 per cent of people in Major cities had skipped a medical service or medication in the past year for this reason, the percentage increased with remoteness to over 20 per cent in regional areas and to almost 35 per cent in remote areas.

It is a matter of concern to the Alliance that, in all of the debate about the universality of Medicare and the impact of increased copayments for access to a doctor, little or no thought has been given to those who are worst off when it comes to such access. These are the people who have no local GP at all.

People in more remote areas may well benefit in the long term from medical research – and the Medical Research Future Fund – but a more urgent priority is to find and use the evidence about how primary care and other health-related services can be better delivered where there is no GP.

Announcements in the 2014 Federal Budget will result in significant rationalisation of agencies in the national health portfolio. It will include the amalgamation of six bodies into a single new agency and the absorption of the functions of three other agencies into the Department of Health. The paper Rationalisation of agencies in the Federal health portfolio summarises the Government's intentions and speculates about the potential impact on health services provided in rural and remote areas.


Budgeting for better health in the Bush

The Alliance continues to seek special consideration of the impact of any proposed Budget measures on people who are already experiencing disadvantage.

The Alliance's detailed submission on out-of-pocket costs (to the Senate enquiry) makes it clear that it is people in rural and remote areas who are already more likely to postpone or miss out on a medical service or a medication due to cost.

See our media release Co-payments: missing the point for rural and remote health in response to the report of the National Commission of Audit.

Our news articles such as The principles are important - not the name relating to Medicare Locals before the budget and ongoing public comments reflect the positions outlined in our submissions over time.

The Alliance Submission to the National Commission of Audit (December 2013) and separate Submission to the Senate Inquiry into the Commission's activities (February 2014) highlighted how unfairness is linked with location. The Snapshot of poverty in rural and regional Australia produced by the Alliance and the Australian Council of Social Service reported that poverty and a range of other disadvantages are more prevalent in rural and remote areas. 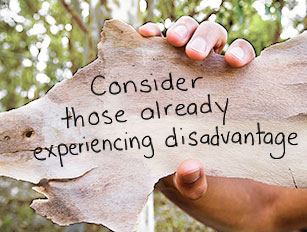 The view from the top

Peter Dutton, Minister for Health and Sports, outlined some of the government's priorities for changes in the health sector in his 'headland' Address to the CEDA Conference on 19 February 2014.

For those like the Alliance whose business is policy, the following may be the key sentence from the Minister’s speech:

"We must be constrained in the way we approach new policies. We must be innovative. We must focus on consumer needs in a sustainable and sensible way. And, fundamentally, we must not add cost."

The view from the field

The extent to which the health sector will be subject to cuts is still unclear but the government will have to introduce changes in one or more of the four key areas of expenditure listed above by Minister Dutton if it is serious about reining in increasing costs.

Clearly there will be a response to the review of Medicare Locals, now with Government, which focused on the functions that Medicare Locals should and should not have. The Alliance believes that some form of regional infrastructure, respecting the full range of allied health, nursing and medical practitioners is now part of health care delivery in Australia. The Alliance Submission to the Medicare Locals Review placed importance on functions such as analysis of local need - and perhaps a role in workforce – for improving rural and remote health.

The Alliance also made a Submission to the Review of the Personally Controlled Electronic Health Record (PCEHR) and was encouraged to hear Minister Dutton speaking about the importance of an electronic health record in his CEDA Address.

In the future there may well be reviews of the funding of clinical training and of medical training as a whole. The Alliance has a strong ongoing interest in overcoming the maldistribution of health professionals across the nation, including our 20 Point Plan: Twenty steps to equal health by 2020.

The biggest 'known unknown' in the Federal Budget and beyond probably relates to Medicare. How might it be restructured? The Alliance is among those who believe that an effectively functioning Medicare is only one part of the funding system that needs to apply to the provision of primary care. The public purse should be just as generous in the provision of low-cost or no cost primary care in areas where there is not the throughput for commercial sustainability as it is in more populated areas.

The 'unknown unknowns' in the Federal Budget are things that will come up unexpectedly. If they are new or more targeted investments, it is to be hoped that rural and remote people are among the main beneficiaries. And if they are savings measures it is to be hoped that families and communities that are already disadvantaged, many of which are in rural and remote areas, are sheltered by some means from their worst effects.